I am shocked! Absolutely shocked!

Over the weekend, I traded emails with a bunch of people regarding the notion of selling 1.25 acres of property in the Water Street development area to Core Resources Inc. so that a Family Dollar could be built on the site. In all but one of those exchanges, I was very diplomatic in my responses; thanking everyone for the email and playing devil’s advocate when appropriate.

In that lone exchange, I predicted a 4-1 vote in favor with the lone vote against agreeing to negotiation the sale of  the parcel of land being me.

I know what you’re thinking. I wrote this cute, little treatise attempting to debunk the reasons for not putting this development in Water Street, but I was really going to vote against? No way. Not possible.

I’m serious. I wrote a companion piece at the same time as THIS wherein I tried to lay out my opposition. I think it was pretty decent. It would have still pissed everyone off, but what doesn’t?

On Monday morning I received a call from one of my constituents about the proposed project wherein we got into this long, heated argument. My exchanges with this constituent usually involve a lot of yelling and a lot of profanity, but they always end with an understanding of the issue(s). This conversation was no different. While I didn’t want to do it, I told this particular constituent that I was planning to vote against the project. I then proceeded to tell her that if she wanted to be against the project, she should be against it not because it was a dollar store, but because it doesn’t fit the form of what we want in an urban downtown.

I’m very surprised I haven’t made more progress with the argument “It’s not about the tenant. It’s about the building”, but I haven’t.

As much as we love our local businesses, most of them aren’t going to be here in 15, 25, or 50 years. But what will remain are the buildings. And what’s most important about these building is they can be re-used for a new purpose. It’s fine that people want to find specific tenants or business-types, but they need to fit into a style of building that will function long after these “desirable” businesses have gone. I don’t use quotation marks as sign of derision. I use them as a sign of flavor of the week. People may hate dollar stores now, but I remember when downtowns welcomed them with open arms and they were called Woolworths. People may want [ blank ] now, but we used to want record stores, comic book shops, and appliance repair stores not too long ago.

Up until about 7:25PM on Tuesday, November 20th I was absolutely positive the style of building being proposed by Core Resources Inc. didn’t fit the site. While it had the zero set-back we wanted, it had an entrance to a parking lot off Michigan Avenue. While the building had height, it was a faux two-story look and feel. When asked by one of my colleagues if a second floor could be added in the future, the representative from Family Dollar said that it would be impractical. The renderings the company provided don’t have a lot of windows.

The building wasn’t anything like the Kresge or Mack & Mack or Mellencamp buildings. As much as people want to see [ blank ] on Water Street, as an elected official, I think it’s my job to see that what goes on the Water Street development are buildings. Not just any buildings mind you. Buildings that will be there for a very long time and make us think “Yeah, this is what a commercial business district in a small urban community is supposed to look like.”

And it’s worth repeating, as far as I was concerned, this proposal wasn’t it. 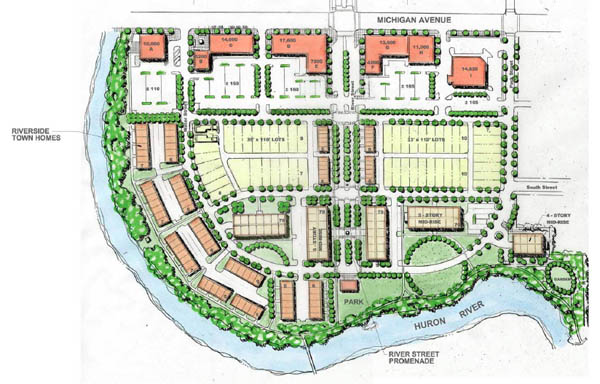 During audience participation (after all of the objections to the project were heard), former City of Ypsilanti planner Richard Murphy got up and spoke his piece for three minutes. And in those three minutes, he changed my mind.

In a far more eloquent way, he laid out similar objections to mine, but then he dropped the mother of all bombs.

He literally pulled out a page from our beloved Freed plan from 2006 and said this building — BUILDING, not BUSINESS — was exactly what was in the Freed plan.

Then he took it a step further and proceeded to tell us this building was even better. BETTER! WTF!?!? 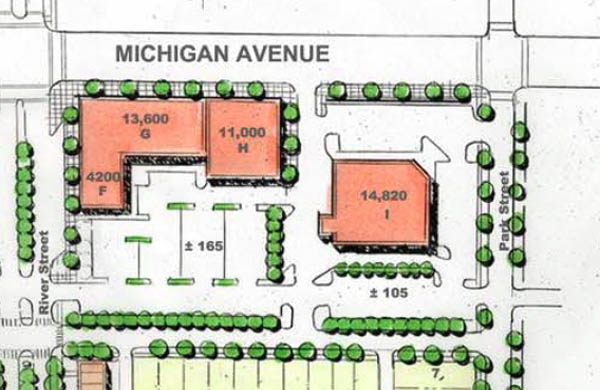 At that moment, I couldn’t have been more proud. While I don’t know Richard Murphy all that well, I do know that he knows what he’s talking about. And now that he has been freed from the shackles of being a City employee, he can publicly speak his mind on issues like any other resident. And when Richard Murphy speaks, you listen.

It was beautiful. Although I can’t be certain, I swear he had a look in his eyes that he wanted to shove that Freed plan down someone’s throat. I was in awe.

Voting against signing a letter of intent at that point would have been hypocritical. Hell, I would have circulated the recall petitions myself if I’d voted NO.

Now this may sound wishy-washy, but all of this doesn’t mean I’m going to vote for the sale if this ever does come back to Council for a vote. I promised current City Planner Teresa Gillotti my wish list of things that need to be included in any development agreement.

The windows thing is huge for me. I drive down Michigan Avenue every day to Dearborn and pass re-purposed building after re-purposed building (similar in function to what we are seeing in Family Dollar) with windows. Some of these buildings are all windows on the front. We all talk about the Bomber block since it’s next to this site. Well, that entire block has large windows on Michigan Avenue. Sherwin-Williams. The Bomber. PCS. Lucky Seven. Windows. We need windows.

I said that I hate no-trade clauses in professional sports contracts. I hate restrictive covenants in development agreements. Family Dollar wants an exclusivity clause that says they can be the only retailer of their type in Water Street. That might sound okay, but unless the definition is ironclad, I can’t live with that.

I’d also like to see staff hammer these guys over materials too. KFC used brick…

It should be noted that this building is supposed to be unlike most Family Dollar stores. This one will be owned by the company. In the vast, vast majority of their 7,500 nationwide stores, they rent space. Scoff if you will, they are making a commitment to the area.

The total investment in the project is expected to be in excess of $1.2M.

Core Resources Inc. would act as the contractor for the project, but would use local sub-contractors.

Most of the members of the audience left disappointed in Council. Some people who embrace Deja Vu as a local Ypsilanti business said we [Ypsilanti] would become a laughingstock for allowing Family Dollar to build in Water Street. [ ed. note:  The Ypsilanti Art Theatre (Deja Vu) is my landlord. ] Some even said this store would steal business away from current downtown businesses (that comment did give me a small feeling of validation). Someone even said this project smacks of poverty.

Battle lines have been drawn.

I hate that this town is always picking sides, but if that’s the way it’s going to be, bring on armegeddon.

Damn you, Richard Murphy. Damn you to hell.